With bitcoin losing more than 30% of its value over the last week and a half alone, bitcoin miners are increasingly feeling the pressure as well. At USD 4,300, bitcoin is now at the lowest level seen since October 2017. 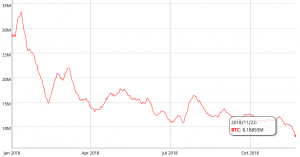 It is the USD value of new coins minted on a given day multiplied by the opening price on the same day. Source: coinmetrics.io

“Pretty concerning for small-time miners like me… Thankfully, I get extremely cheap power but it’s hard to compete with economies of scale when some miners can buy hundreds of ASICs at a time,” Reddit user PragmaticPleb wrote in a thread.

“I’m still running but the margins are thin and I might have to come out of pocket to cover some costs if the price drops even more. We’ll just have to do our best to weather this bear market and hopefully we can come out on the other side when the price begins to recover,” IGotThisYo replied.

Some large mining firms are already throwing in the towel. On Wednesday, it was reported that US-based mining form Giga Watt had filed for bankruptcy in Washington, still owing creditors nearly USD 7 million.

According to another article by the South China Morning Post on Thursday,

the China-based mining pool F2Pool now estimates that a range of mining machines, including the Antminer S7, S9, and AvalonMiner 741, has now become unprofitable to operate in China, leading to a flood of these machines being put up for sale on the second-hand market.

Some, however, see opportunities when others are suffering. According to the same article, a miner by the name Jack Liao of the Shenzhen, China-based bitcoin mining firm Lightning Asic, has taken advantage of the slump to buy up second-hand mining machines at bargain prices.

Most Read:  This Leading Altcoin Only Has 8% Chance of Further Decline Against Bitcoin

Liao told the newspaper that he has bought up about 50,000 mining machines, most of which are Antminer S9s, for about USD 70 each. A new S9 machine goes for around USD 300 from Bitmain’s website.

As WhalePanda, an angel investor and bitcoin enthusiast, posted to Twitter, the losses that miners have suffered are already visible on the bitcoin hash rate:

A lot of miners are currently losing money. You can already see the impact of it on the Bitcoin hash rate with miners getting shut down. We’ve had 2 difficulty adjustments down and the next one will again be a lower one (even though it’s still ~9-10 days from away) pic.twitter.com/mCZwFoPYp2

Moreover, it looks like the Bitcoin blockchain is also adding blocks at a slower rate than usual.

Another casualty of the bear market: Bitcoin’s inter-blocktime is actually getting longer. As hashpower comes offline, difficulty isn’t reducing fast enough to cope, and Bitcoin is adding blocks at a slower rate than usual.https://t.co/IuY5cLP5zp pic.twitter.com/WPIg1sTkTR

Bitcoin hashrate is now the lowest it’s been since August. It’s still up sharply since the start of the year but it seems clear that some miners are shutting down their rigs in face of lower BTC prices. pic.twitter.com/Og9AJM6FGt

And since today is “Black Friday,” more or less desperate cloud mining companies, including the well-known Genesis Mining, are trying to push their mining contracts to new customers at discounted prices. However, as can be seen from the replies on Twitter, the community is not exactly impressed by the offering.

2/2 expire quicker and quicker, save your money and actually buy bitcoin then just HODL!